A Paper Pumpkin Thing Blog Hop is thrilled to have so many Display Stampers along with both current and former Artisan Design Team members participating. You are sure to be inspired especially if you are looking for alternative ideas to your kit! So, make certain to visit every blog.

I really am excited about the two projects that I’m sharing. The first project is a beautiful, clean and simple card.  For the second project, I created an adorable little treat box. Read on for all the fun details, but, first, we have a BIG announcement…

In April, we gave away one of the “A Sara Thing” Paper Pumpkin Kits. It was a challenge to figure out and make certain those participating had commented on all the Blogs. We know there were some issues with commenting and as long as you emailed one of us, you were entered into the drawing.  We know you’ve been wondering who was the winner!  So, a big shout out and congratulations to…

So, I really struggled initially to come up with an alternative card for this months Sprinkled with Love Paper Pumpkin Kit! I knew that I wanted to make it a “regular” shaped card but just wasn’t certain exactly how I was going to do it.  All the pieces in the kit were a bit larger than I preferred. But, I finally figured it out!

Today’s card features the Very Vanilla donut shape with a bite taken out of the donut.  I’m just going to say that paper doesn’t taste as good as an actual donut! To help with the teeth marks, I did actually bite the paper then cut out along the outer edge of the teeth marks. Now I’m actually craving a REAL donut!

Father’s Day is just around the corner and since my husband loves the occasional Dunkin’ Donut, I added some chocolate sprinkles. Oh, and when he eats a donut, Mike has a tendency to be a little messy so a bunch of those sprinkles fell off the donut onto the card front. The sprinkles are a nice dark, chocolaty Early Espresso.  The banner features the Soft Sky blue banner that is included with the kit. I used the enclosed stamp set to stamp the “Donut Forget You Are The Best” sentiment. Then, I used the AWESOME Labeler Alphabet Stamp Set to stamp “DAD” which I fussy cut and glued to the banner.

Well, since this kit has a donut theme going, I figured I needed a box for an actual donut! So, Mike reads this he knows he’ll be getting a donut from our son for Father’s Day! This box was a bit of a challenge since I wanted to use the Envelope Punch Board and took a few tries to get the size that I wanted. And, I confess… I really wanted a square box but my math skills were not cooperating this morning.  Oh, did I mention that I got up at the crack of dawn to finish my projects and this blog post! Let me just say that I’m NOT a morning person and leave it at that!

The box is Sahara Sand and I took a 12×12 sheet cut down to 10 7/8″ square. Using the Envelope Punch Board, I punched and scored at the 3 1/2″ mark on each side but had to “flip” it to get the 2″ side that I wanted.  Still not certain how it didn’t turn out square based on my calculations but I’m not a math major!  The box will still fit a donut so I’m happy!

To decorate the box, I tied a piece of Burlap Ribbon around the box for that rustic “masculine” touch. Next, I used the Soft Sky circle shape with the gold dashes for a cool looking feature which also works to hold down the flap opening of the box. The banner is stamped using Early Espresso and the enclosed Sprinkled with Love Stamp Set. Again, I added the “dad” stamped using the Labeler Alphabet Stamp Set.

Yes, the finishing touch is more gold twine attached to the back of the banner. Oh, and the banner also comes from the kit. The banner is then attached to the circle which is attached to the front of the box.
So, there you have it!  A quick, fun Donut for Dad box! Now I just need to remember to buy some Chocolate frosted raised donuts for Father’s Day.

Hope you’ve enjoyed the projects that I’ve shared today for A Paper Pumpkin Thing Blog Hop.  Next up is Jennifer Hill!  I’m certain you’ll enjoy the projects she has to share with you!  To view her blog, you can click on her name or on the NEXT Button. 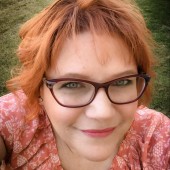 Pam Staples is a Stampin' Up! Independent Demonstrator located in Smithfield, NC just southeast of Raleigh, NC. Pam is a mom to a special needs child, wife and 2x Cancer survivor.

The content in this blog is the sole responsibility of Pamela Staples as an independent Stampin' Up! demonstrator. The use of and content of classes, services or products offered is not endorsed by Stampin' Up!